The second largest city of Achaea, with a long history. It is a popular touristic destination and has many picturesque sights.

The city of Aigio is the second largest city of Achaea, called Vostitsa during the Byzantine period, the word meaning "City of Gardens" from a Slavic term. Today, it is an industrial centre and an important trade port of the area; for many years it was a raisin export nexus. It sits on the northwestern part of Peloponnese, built amphitheatrically and taking the nickname of the "balcony of the Cornithian".

The tales that explain the name Aigio are many. According to the prevalent one, it comes from the sacred goat (aiga in Greek) that fed her milk to Zeus while he was a baby; another supports that it comes from the verb "aisso" and it means the city of waves.

The city itself extends on three levels: the seaside part, called Kato poli (Low city), the Galaxidiotika or Agios Antreas' area, called Mesi poli (Middle city) and the Ano poli (High city), where is the historical centre. The greater area of Aigio, called Aigialeia, is well-known for its historical churches and its many monasteries.

One of its most popular customs are the "Anthestiria-Elikeia", the first week of July, where floral floats parade around, and the Festival of Zoodochos Pigi, the first Friday after Easter.

According to mythology, the city was founded in the middle of the 16th century BC from the Ionians of Attica, one of the four major tribes of ancient Greeks; according to another, the founders were the Aegialian Pelasgians, a part of the Pelasgian population who are thought to be ancestors to the Ancient Greeks, and they made the city into an important political and religious centre.

In 145 BC, the city fell in the hands of the Romans and a second period of growth begun. Then, during the Byzantine rule, it was renamed to Vostitsa and passed through a period of obscurity after the descent of the Slavs to Peloponnese, which took place around 800 AD. It retained its Byzantine name during the Frankish rule, when it was the seat of the Barony of the area. In 1420, it was taken by the Despotate of Mystras, and then it was briefly under Venetian rule for a while before finally succumbing to the Turks. Under the Turkish rule, it knew another growth, again thanks to its geographical position.

In January of 1821, the Filiki Etairia (Society of Friends, a secret organisation whose purpose was to overthrow the Ottomans) of north Peloponnese met in Vostitsa, still retaining its Byzantine name, to decide when the Revolution would begin. This meeting is known as the Secret Assembly of Vostitsa or the Conference of Vistitsa, and many leading people of the Revolution took part in it, such as Germanos III of Old Patras and Papaflessas. Aigio was one of the first cities to be liberated.

Aigio's most important sights are: 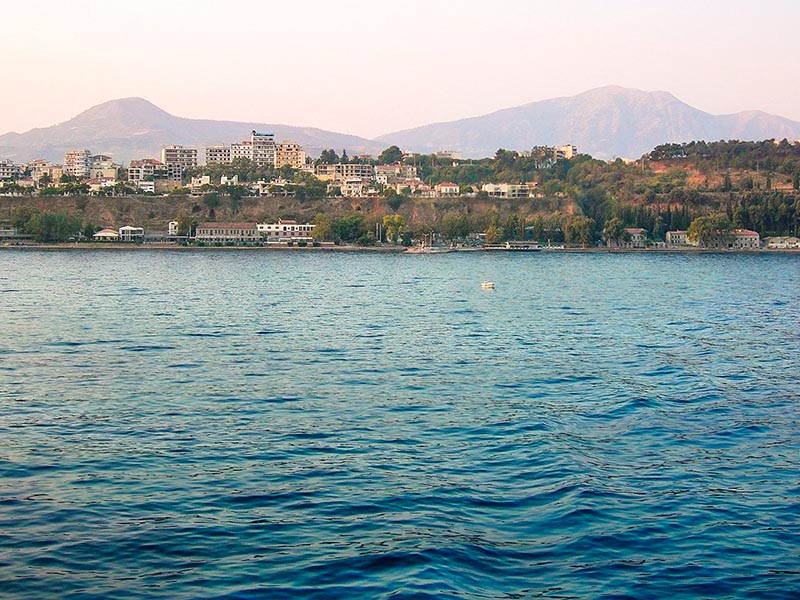