Monastery of Panagia of Philosophos

Two monasteries with a very long history, the oldest founded in 960 in an inaccessible location.

The Monastery of Philosophos (which means Philosopher in Greek), is about 15 kilometres from Dimitsana, in Arcadia region. It is comprised of two complexes, called Old and New monastery. Access to the Monastery is either through the road connecting Dimitsana and Palaiochori or through the road connecting Zatouna and Vlogko, crossing through a green plain. The visitor will reach the square of New Monastery of Philosophos, and from the square of the monastery, a downhill road will lead to the Old Monastery, and then to the shore of Lousios river and Prodromos Monastery, on the opposite shore.

The old monastery was founded in 960, by Ioannis Lampardopoulos, the prime minister of the Byzantine Emperor Nikephoros II Phokas; his desire was to dedicate himself to God and return to his homeland, Dimitsana. The Emperor was hesitant about monasticism, but gave his permission to found the monastery. He wanted to strengthen the Greek presence in Peloponnese, because many Slavic tribes were migrating in it.

Lampardopoulos chose a hard to reach area for the building of his monastery. He had already taken a special decree from the Patriarch, so that he was under the Patriarch himself, and not any local bishops, exempt of taxes. The Old Monastery was built in a narrow opening, 130 metres in length and its width ranging from 0.6 metres to 8 metres. It was walled in the 17th century, the wall equipped with battlements and guns, and a long interior corridor leading to the cells, the warehouse and, on its end, the church.

The church itself was a cross-shaped Byzantine church with a dome, decorated with toothed ribbons that are found in other places, as well. The Monastery was often called “Kryfo Scholio” by the locals (a church where the priests taught Greek and the Christian Orthodox religion despite being forbidden by the Turks); the monastery was so well defended, both naturally and by man-made structures, that the Greek children were taught by the monks in relative peace.

In 1691, during the first years of the Venetian Rule, the monks of the Old Monastery of Philosophos decided to found a monastery in an easier to reach spot. The spot chosen was a rock 400 metres north of the Old Monastery, with great view and near springs of drinking water.

Initially, the church was built as a cross-shaped one, with a dome, in the Byzantine style. It was dedicated to the Dormition of the Mother of God. The roof is shaped in a cross, and in the south wall is a small belfry for two bells. The sign on the narthex’ middle gate states that the murals were painted in 1693. Other than the great murals, the church has beautiful pictures of the Cretan School, and the larger icons on the templo bear the signature “[by the] Hand [of] Viktor”; that was the signature of a great hagiographer of the time, “Viktor the Kris”, or Viktor of Crete.

In 1700, a guesthouse was built in the New Monastery, to accommodate the worshippers and the students of the School that was operating during the Second Turkish Rule of 1691 to 1764. The school was attended by seven students who later came to be Patriarchs and about seventy who were made archpriests. The rich collection of the library housed in the Monastery contained important manuscripts and printed books that were transferred to the Library of Dimitsanis School, founded in 1764.

In 1834, the Monastery of Philosophos was closed after the decision of the Regency, since it had less than six monks. It became a dependency of the Monastery of Prodromos. However, in 1992 up to 1994, renovation works were carried out in the monastery, and it was reopened in the 2nd of July, 1994. That day is celebrated every year, to commemorate its reopening. 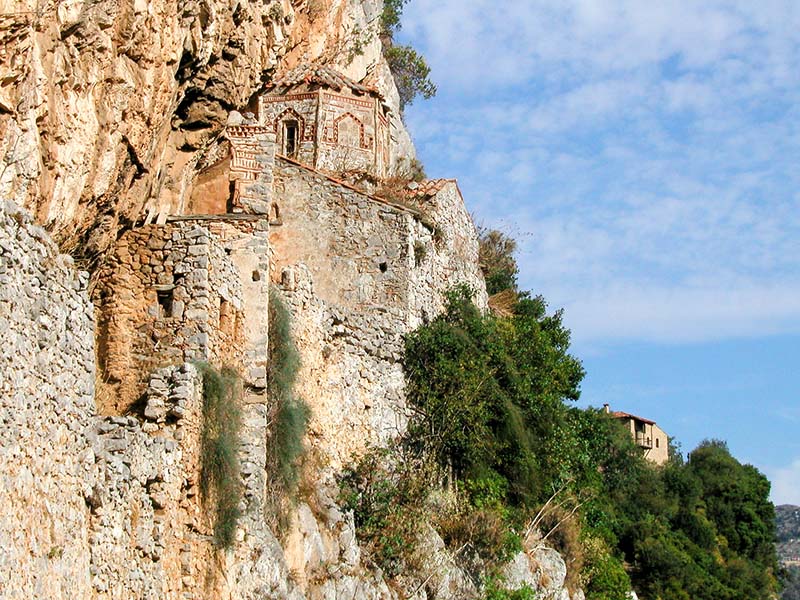